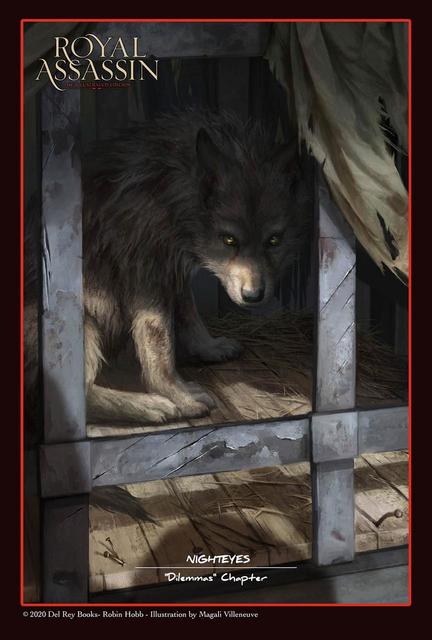 Nighteyes, as envisioned by Magali Villeneuve

On June 16, two weeks from today, the Illustrated Edition of Royal Assassin will be published!

Revealed today is Nighteyes, a beloved character first introduced in Royal Assassin. The artwork is by Magali Villeneuve.  This French artist (and friend) is best known for her work on Magic the Gathering, but has also created artwork for The Lord of the Ring, Game of Thrones, books by Brandon Sanderson and Dungeons and Dragons. A visit to her website is highly recommended!

Royal Assassin is the second volume of the Farseer Trilogy.  The first book, Assassin's Apprentice, is already available in a handsome matching volume, also illustrated by Magali Villeneuve.  Assassin's Quest, the concluding volume, will be issued in a matching binding and also with Magali's illustrations. This is the first time that all three volumes of the trilogy will be available in matching hardbacks in the US.

Penguin RandomHouse makes it very easy to pre-order the volume, with links to many of your favorite book sellers here.

And yes, there will be a UK edition, also with the Magali Villeneuve illustrations, from Harper Voyager.

Do you know where we can get the illustrated Royal Assassin in the UK, Robin? I've checked Amazon, where I ordered AA, but can't find it listed.

Ahh, nevermind, there it is. Found it under Magali's name.
Looking forward to it.

Hi Robin!! Will you be signing copies at the university bookstore again for Royal Assasin, like you did with the illustrated version of Assasin's Apprentice?

Yes! I will be signing at University Book Store. It probably won't be a public signing, alas. But there is still time to pre-order the book(s) from them, and I will go in suitably masked and dedicate and sign books. Hm. Seems like I should make a blog about that! With a link!

Love this imagining of someone I feel is an old friend!