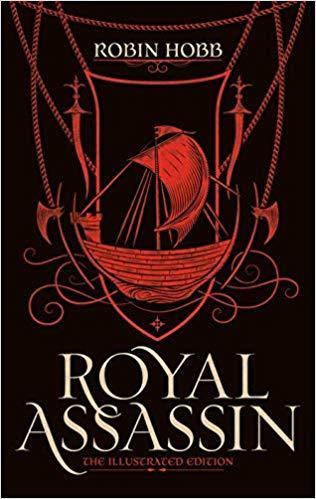 Greetings, readers!  This is just a quick reminder that you may now preorder the next volume of the hard back illustrated editions of The Farseer Trilogy.

Assassin's Apprentice, in hardback with illustrations of Magali Villeneuve (an artist very well known for her work on Magic the Gathering cards) has been available for months now.

Joining that lineup is Royal Assassin in a matching volume. Each book has ten color plates by Magali, as well as lovely endpapers

This set will be completed in months to come with Assassin's Quest.  This is the first time the trilogy has been offered in the US in matching hardbacks.

Royal Assassin can be pre-ordered anywhere that you purchase books.  At your local brick and mortar bookstosre, at Amazon or any on line book service, and of course through The Signed Page.   The Signed Page offers a wide variety of signed first editions, painstakingly shipped to arrive in pristine condition.

If you would like your copy signed, or with a special dedication, that can be managed through The University Book Store in Seattle, Washington.  For specific directions on how to do that please seen the Questions Answered page for this site.

This is awesome! Thank you!

Changes in the websites or, To Write or To Be A Writer

If you have visited here before, you may note some changes we've made.  Some may seem unfriendly, but they are certainly not intended that way! And if you follow me on other social media, you've definitely seen some changes.

Being a writer these days creates a lot of tasks.  Answer email.  Have a lively social media presence.  Promote you own books. Attend conventions, conference and comic cons.  Review the books you are reading or listening to.  Be clever on twitter.  Post almost daily on Facebook.  Have an interesting blog.

It used to be that 'being a writer' just meant that I had to try to write at least one book a year!  If I received a letter from a reader, usually via the publisher's mailing address, it was a remarkable occurrence!  Now an average day brings a dozen emails of various kinds.

I've been trying to establish a regular writing schedule for myself, after slacking off for a number of months.  One of the things I used to do was open my email first and try to answer it all before moving on to other tasks.  It's nice to be in touch with readers, to hear stories of where they read the books or what parts they enjoyed.  Keeping in touch with readers and reaching back when they write to me is a big part of being a writer.

Unfortunately, these days, by the time I reached the end of the emails, checked Facebook, skimmed through Twitter, and glanced at Insttagram  the key presses in my fingers had been used up, and as a result the stories I've been working on have not moved forward. Nor have I blogged here at all lately!

So, I am trying a new pattern.  Kat and I have disabled the 'contact Robin Hobb' button. If you have 'official' business, you can still reach me via The Lotts Agency for literary stuff, and Rand Holston at Paradigm agency for everything else.

As I mentioned, this may seem unfriendly. It's not intended that way.  It's my way of pushing myself to get back to writing, rather than spending my writing hours 'being a writer.'   So you have seen less of me on social media and you will see even less now.  And while I've already said I'll be at Emerald City Comic Con, I only plan to drive up, stay one day, and then head for home, and the keyboard.

I think the vast majority of my readers would rather have a new book sometime in 2021 than see me dithering on line.

I hope I'm right about that.

I will try to do regular updates here at robinhobbcom   I hope you'll take the time to drop by.