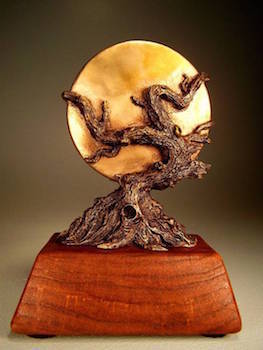 Since 1994, I have shared a computer keyboard and office space with Megan Lindholm.  Or perhaps it's more correct to say she has shared those with me, as her existence predates mine by over a score of years.

As announced in Locus Magazine , this coming November Megan will be honored with the World Fantasy Lifetime Achievement Award.  Alongside her, Howard Waldrop will likewise be honored for many years of astonishing and wonderful short stories in our genre.

Megan was totally gobsmacked when she received advance notice of this via a phone call from Gordon Van Gelder.  I think she is still processing it, as she hasn't said too much about it.  After all, this award has been previously given to luminaries such as Fritz Leiber and Robert Bloch, Stephen King and Terry Brooks, Jack Vance, Theodore Sturgeon, and well, the list seems to match the backs of the books on my shelves.  These are people who have shaped fantasy into what it is today.  It's a bit shocking to think of adding Megan's name to that list. Although I do have her books on my shelves.

The award has been around since 1975.  All the World Fantasy Awards are voted on by members of the current and  the two year's previous World Fantasy Convention membership. The Lifetime Achievement award is the only one announced in advance.  For all the others, the suspense and the voting will continue util the convention in November.

This year's World Fantasy Convention will be held in Montreal, Canada, the first weekend in November.  It's not too late to buy a membership and voting privileges.  You can register as an attending or supporting member. Some notable Honored Guests this year include Owl Goingback and Nisi Shawl. and John Picacio as Artist Guest of Honor.  I know that Megan is hoping to attend as well.  If she does, I will accompany her.  We will hope to see you there.

I was so excited to hear of this. It is so well deserved. Congrats to you, and thanks again for your work.

Congratulations! Well-deserved and hard-earned, best regards from your Russian fans!

I cannot think of anyone more deserving, as your books have made an indelible mark on my world and given me countless hours of joy and escape.

I only discovered Megan/Robin about two or three years ago, and I am absolutely in love and share her works with everyone. I hate that I'm about a month late seeing this post, but it is WELL deserved.

Congratulations, and thank you for sharing your stories with us!